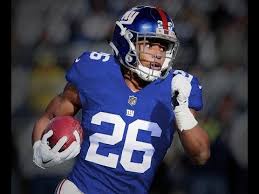 The Giants have won only four of their first 12 games in the 2018 season, but a bright spot is rookie running back Saquon Barkley, who was selected by the Giants second overall in the 2018 NFL Draft. Barkley has 954 rushing yards and 602 receiving yards, for a total of 1,556 yards from scrimmage. He also has eight rushing touchdowns and four receiving touchdowns.

On December 2 against the Chicago Bears, Barkley broke the Giants’ 82-year-old rookie rushing record that was previously held by Tuffy Leemans. Prior to the team’s 13th game of the season, Barkley needed only one more touchdown to break the rookie record shared by Billy Paschal and Odell Beckham Jr.

Moreover, Barkley was only 137 total yards away from breaking the NFL record for most yards from scrimmage. The current record of 2,212 yards is held by Eric Dickerson.